Jen and I have continued reading the Tiffany Aching books in Terry Pratchett's Discworld series, and just finished Wintersmith, the third book. I'm consistently amazed at how well each of the Discworld books stands on its own, while simultaneously benefitting from the rich tapestry of the other books. This one had callouts to previous books in the Tiffany Aching series, some references to events in other books dedicated to the witches, and even a mention at the end of young Sam Vime's favorite book, "Where's My Cow?" But the beauty is that you don't need to have read any of the other books; they're almost like easter eggs: delightful callouts to those who know the series, but otherwise just lovely details for the reader. I really cannot recommend the series enough!

I was also excited this month by the return of Saga. Saga is a SFF comic series published by Image Comics that I've been following since it started. The series is narrated by the daughter of two people from opposite sides of an interplanetary conflict, detailing her childhood; it's beautifully illustrated, and has some wonderful character arcs. Around three years ago, the author/artist team finished their first major arc, with an enormous, gut-wrenching cliff hanger... and went on hiatus. This past month, they came back, and it's been a delight.

Pretty much the same as last month, though less. I haven't been doing as much art this past month, and when I have, we've often had a TV program running in the background instead of music.

I've been crazy busy at work the past month and more, and didn't code as much as I'd have liked...

Except I have done work on this very website! I decided it was time to own my own content, and have set things up both so that I can post my own artwork, as well as have artwork I post to Instagram be auto-uploaded here. You can check out my art page to see what I've been working on, going back to late 2019.

This month, it feels a bit like I've "leveled up" at work. This was in no small part due to two things:

The first change I made was to end my work on Friday by going through my notes and lists from the week and finding what I hadn't finished. I then determine if unfinished items are important or not. If they are, I ask if they're important right now. From there, they either go in the bin, in my backlog, or back onto my list for next week. I also go through my backlog to see what tasks might be important to work on in the coming week. And finally, I look at my calendar for the next week, and into the following Monday, to see if there are things I need to prepare for, adding those to my todo list. Once that's compiled, I create a list of items I want to do for Monday, and block out focus time for one or more of those tasks.

Each day of the week, as the last thing I do in my work day, I either move unfinished tasks from the day to the list for the next day, or grab tasks from this week's todo list, and then, again block out focus time the next day. Generally, focus time ends up in the afternoon, as that's when I have blocks of uninterrupted time still.

These changes mean that:

Since a large part of my team is in Europe and Israel, my days are front-loaded with meetings; it's not uncommon to have meetings from 8 until 11 in the morning. My afternoons are then spent focusing on tasks, and getting things done.

Because I do my planning at the end of the day, I also have a natural transition time, and end up more relaxed, as I know I'm prepared for the next day.

One aspect of my mental health since the pandemic began is that I realized that I've not been sleeping well. I couldn't remember when I'd last felt rested after a night's sleep, and several days a week, I'd wake with headaches. I initially attributed the headaches to having too many drinks at night, but this wasn't realy true. One or two cocktails spread out over an evening doesn't lead to hangovers, particularly when I'm also keeping hydrated. So I then just attributed it to age.

At Jens' nudging, I spoke to my doctor, and he ordered a sleep study... and, you guessed it, sleep apnea.

I started on a CPAP a couple weeks ago, and the difference has been astonishing. I wake up feeling rested, I have more energy, I'm less irritated by the small things.

I wish I'd done it sooner.

I've not been drawing quite as often, but I do get several drawings in a week. Most recently, I'm really proud of this larger tile; it took me five or six sessions to complete, and incorporates a ton of things I've learned in the past month or two. 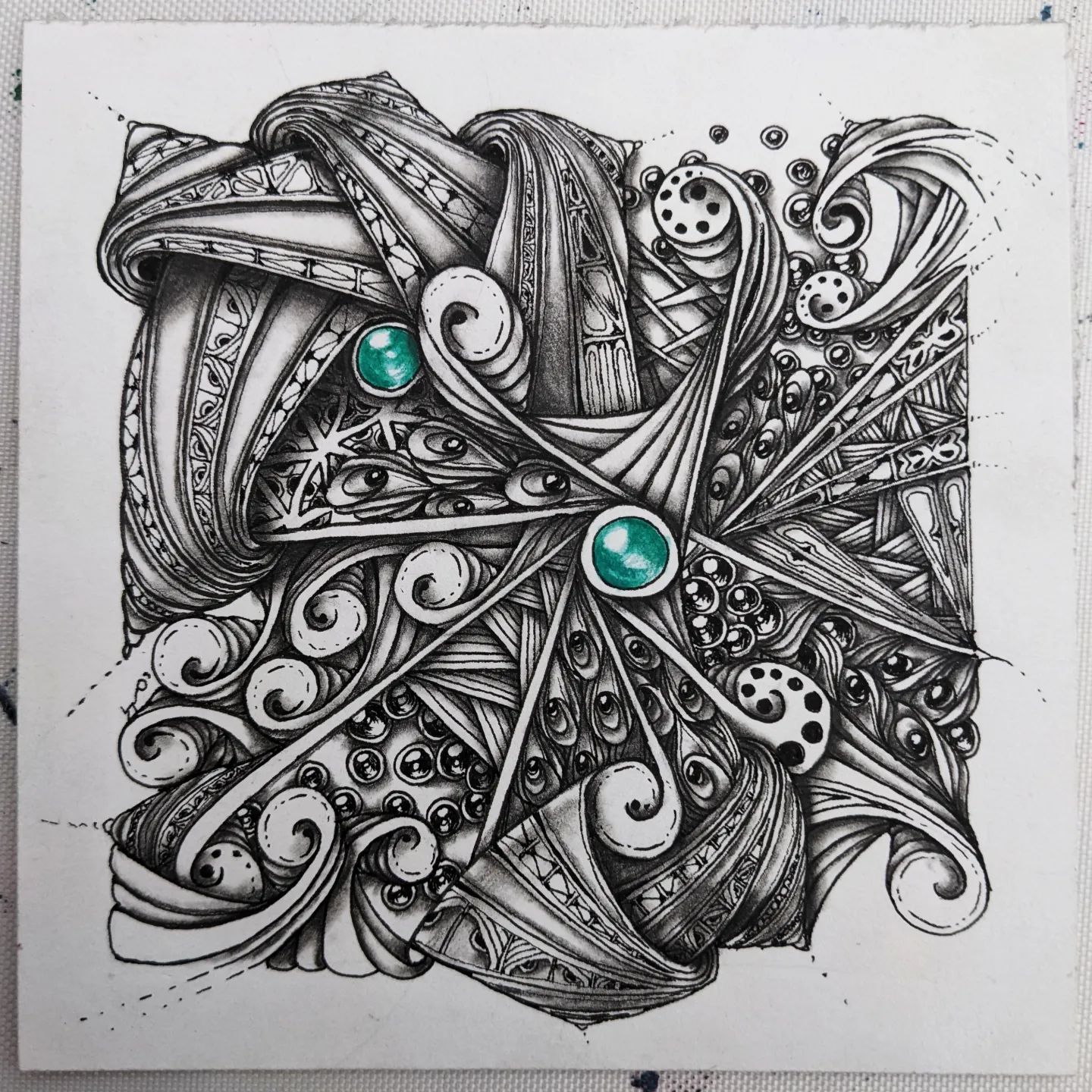