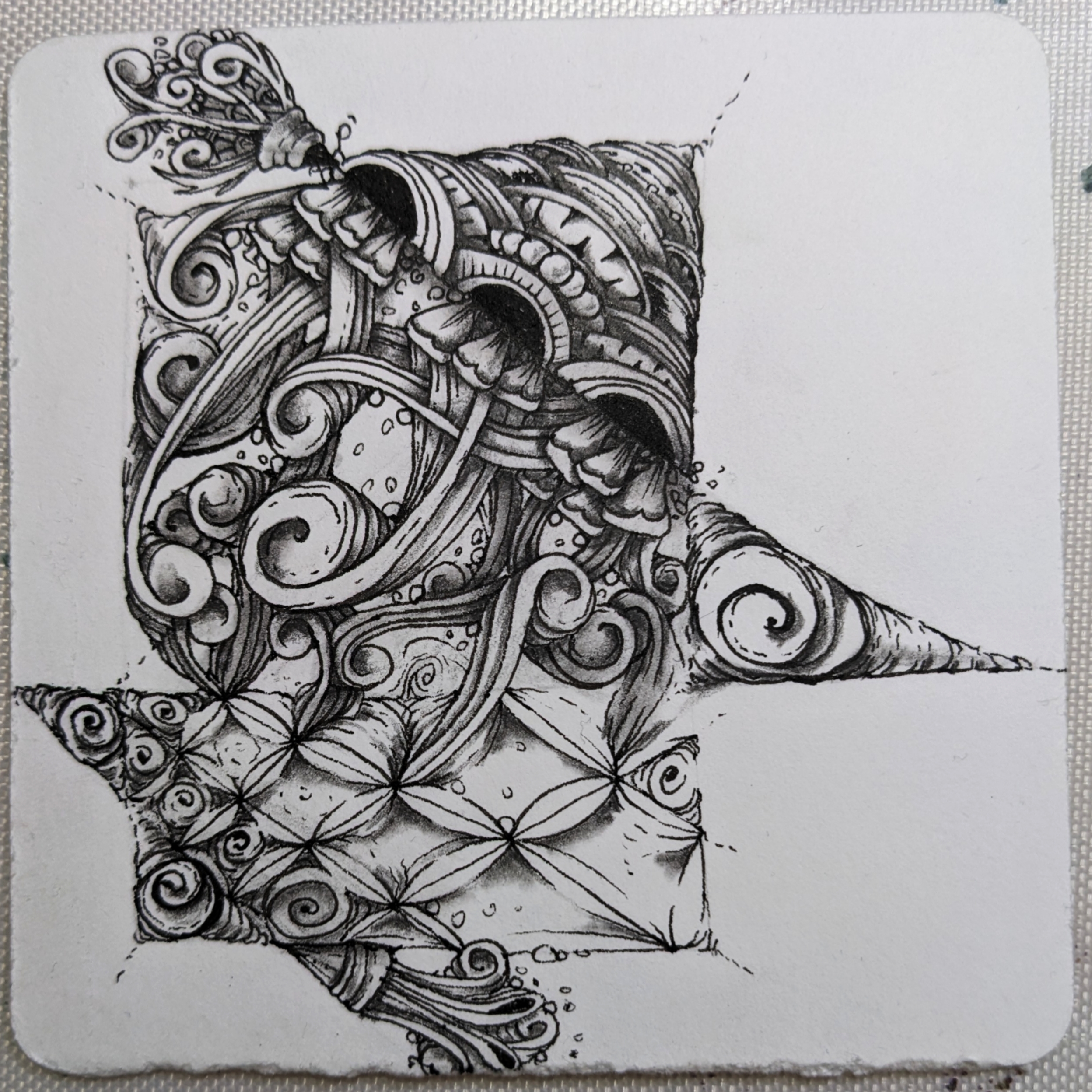 Zentangle Back to Basics, 2022 Retrospective

This week in Eni Oken's Art Club, we did a 2022 retrospective, and went back to basics with a standard Z-string tile. Here are my reflections and thoughts.

The year in numbers

I've found this year I've slowed down, sometimes just in terms of my drawing pace, others due to fatigue and depression. Art always feels good to create, but I just can't always motivate myself to sit at the desk and draw.

I've also found a continuation of something that's started since I started Art Club: my tiles take longer and longer to create. This is not due to having "planning mind", like I might expect, but because it takes me 2-3 hours to do the line art, and then another 2-3 hours to shade. I get a ton of Zen flow in each activitiy, but it means that I often take a few sittings to do a single tile, which means the pace of my output is far less than the first couple years I was drawing. I do not see this as a bad thing, just an observation of how I produce art.

I had a few lessons that really changed how I draw this year.

Eni has a great course on tangle transitions, which I worked my way through early in the year. Then, as a result of asking questions, she revisited the series during Art Club, going into more detail on each of the advanced transition types (edge work, blending, and bridges), and, more interestingly, different techniques of shading when using these transitions. I found myself using these techniques everywhere this year.

We also did a few courses that featured a lot of auras. Auras are a fundamental Zentangle technique whereby you draw a line parallel to a shape, often repeating the auras multiple times. As with all things Eni does, she pointed out how we can vary distance between auras, group them to provide dimensionality, and more. Combined with her echolines technique, I found myself creating dense shapes from my tangles.

One thing that sprang out of this was a discovery that auras allowed me to create intricate weaves when I have multiple shapes to which I'm applying them. This adds even more dimensionality and interest to my tiles.

Finally, we did some tiles featuring wrapped frames, and I found I could apply the wrapping technique to a variety of different scenarios, which again adds interest and depth.

During this week's class, we went "back to basics", and did a Z-string tile.

The Z-string is a standard way to introduce people to tangling. You create your border in your tile, then draw a Z across it, and tangle in each of the sections. Generally, you use the following tangles:

Eni asked us to start at the very first steps of the Zentangle process, and think about what we've learned this year. One thing we touched: the dots and border do not need to be centered. Nor do they need to create a "frame" for the drawing.

As such, I chose to create my border as a 2/3 rectangle on one side, but have my Z fill the tile. This created some additional areas to tangle within.

When I worked with Crescent Moon, I applied edge work, which made the area have a more dimensional feel, almost like a cone. I also grouped auras, and varied space between them, allowing me to add embellishments.

For the Hollibaugh section, I chose to think of it more as a way to practice the Hollibaugh technique than to use the official tangle, and started creating overlapping dimentional Mooka. I connected them to the Crescent Moon with a bridge of Delwhy.

For the Printemps, I filled some of the triangular sections and used Eni's "squarify" technique. This created some almost carving-like motifs.

When we went to Bales, I did a few things:

Finally, I had a few areas where I felt I could use a little something... and drew some tassles.

For shading, I applied a number of things I learned this year, including shading entire areas, pushing back shapes, and thinking about how my light source might be playing with the shapes.

This is by far the most unique Z-string tile I've drawn, and I love how it incorporates so much of what I've learned and put into practice this year. I'm truly excited to jump into some more tiles and see what new things I'll learn and produce this year.